The area that is now Brentwood was part of the Rancho San Vicente y Santa Monica, a Spanish land-grant ranch sold off in pieces to Anglos after the Mexican-American War. The area now popularly known as Brentwood began following the establishment of the large 600-acre (2.4 km²) Pacific Branch of the National Home for Disabled Soldiers and Sailors in the 1880s. The economic growth stimulated by this veterans facility led to immediate property development outside its west gate.

Originally an agricultural district (soybeans, avocados, et al.), Brentwood is now one of the wealthiest neighborhoods in Los Angeles, and one of the prominent districts of the Westside. It has prosperous commercial districts along each of its major east-west thoroughfares, Wilshire Boulevard, San Vicente Boulevard and Sunset Boulevard. It is largely populated by professionals and executives.

The name Brentwood comes from Brentwood of Essex, England, a town on the outskirts of London dating back to Saxon times. Street names such as Barrington, Gorham, and Bristol, to name a few, are British influenced.

Brentwood today continues to be the sophisticated community that it was destined to be when it was laid out 90 years ago. The successful shopping districts along San Vincente Boulevard and the low-density housing have combined to create a wonderful place to live and to play. It is certainly a large jewel in the crown of Los Angeles.

Brentwood isn’t actually a town or city. It is a section of West Los Angeles. ZIP code 90049, just west of the 405, between UCLA and Santa Monica.

The population of Brentwood is approximately 38,000. There are close to 18,000 residences, made up half of single family dwellings (mostly north of San Vincente) and half apartments or condominiums (mostly south of San Vincente).

Brentwood is called home by many of the area’s most prominent business, political and academic leaders–and of course, movie stars, screen writers, directors and others “in the business.”

San Vincente Boulevard is the “Main Street” of Brentwood where some of LA’s best shopping and dining locations are found, the Country Mart (at 26th and San Vincente) and Brentwood Village (where Barrington and Sunset intersect) also offer anything you might be looking for. 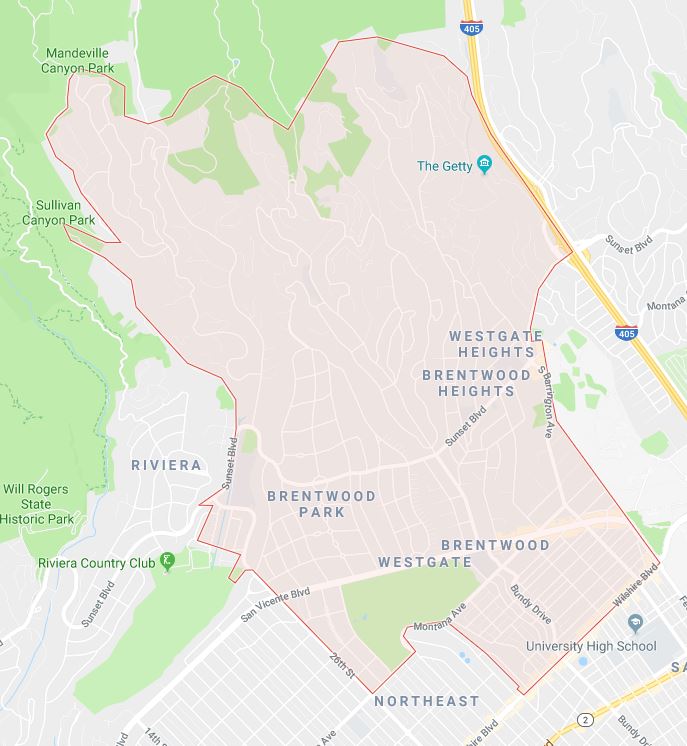